What’s that got to do with bell ringing?

As a spin-off (pun intended) of a group I belong to, I have made a small ropewalk.  I’m successfully producing small cordage in the 2-8mm diameter range.
But, of course, I want to make bell ropes!

I have no aspirations to making full ropes for tower bells.  They are better left to the experts – and, anyway, we don’t need new ropes for Kildwick.  These ropes are for model bells, possibly up to Wombel size and down to little things, most useful as a light pull.

But they all need the woolly sally near the end.

To make these, we need to incorporate short lengths of wool into the strands as the rope is made – and that means cutting lots of short lengths of wool.  To do this, wool is wound for a counted number of turns around a rod which has the required circumference.  This is how it works: 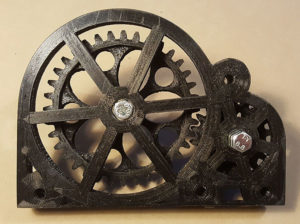 First, make a winding machine.  This was designed from scratch in a 3DCad program.  It’s a pretty basic program, but it has the great advantage that I can get my head around how it works!  All of these components are constructed by adding simple geometric shapes together.
This design was modified before the final production model.  Spot the differences! 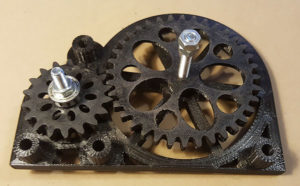 The gear wheels are made so that the big one is twice the diameter (and has twice as many teeth) as the little one.  That means that every turn of the big drive gear produces two rotations of the smaller slave gear. The back of the casing and a bearing need to be attached. 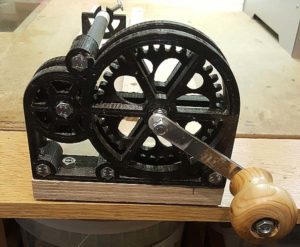 Here, you can see the finished article, attached to a board.  The “conjuror’s wand” is the mandrel for winding the wool and the far end is supported on a “foot” that slides to accommodate different lengths of mandrel.  The knob is turned from a piece of Yew. 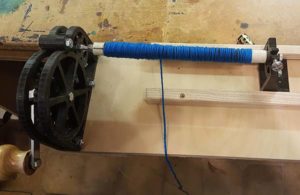 Winding.  Count the turns of the handle and double it.  The whole thing is laid in a trough and the wool sliced with a very sharp blade. 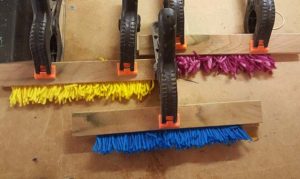 The cut pieces are clamped between two boards and set aside.  The actual process of rope making may come as a separate page – but each of these three strips is inserted between the yarns that make up the three strands. 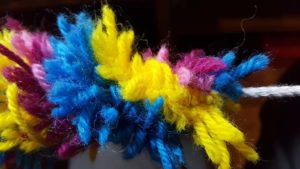 The wool twists into the rope as it is made – but if you look carefully at the close-up on the right, you’ll see that some of the ends of wool are caught back in the rope.  There are some quite big, loose curls of both yellow and blue there – but also some very tight ones at the end.  These need to be teased out.  They call it “combing”, but it is harder work than that! 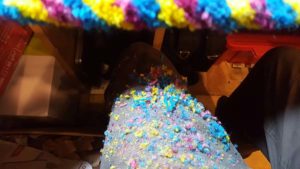 All of  those hairy bits need to be trimmed to make a smooth sally.  We are leaving around half of all that expensive wool on the cutting room floor!

The finished rope.  I’m quite pleased with this one:  The object is to make the top sufficiently flexible to prevent it slipping the wheel on a working model, while getting a tight enough twist on the sally.  It’s not totally authentic, but it seems best to abandon the traditional hemp/flax yarn and use (as in this case) cotton. 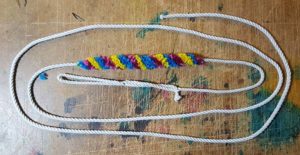